Well, if you read this post you know that my girls had the misfortune of having to sleep with mayo in their hair a couple of weeks ago. It was a necessary evil to get rid of lice. Once the mayo got rinsed out the girls hair was stringy and greasy.

Let me set the stage for you on what was going on in my life during the summer of 2001. Ralph was employed by a group of peanut farmers. It was his first job out of college and off the farm. We were living in Albany, Georgia. Another first for us was that we were living in a "big" city. In a duplex.

Madison was 15 month old at the time. She was, and still is, a very curious child. And, honestly she was always into something.

And me, well, I was very pregnant with Laney. When I say very pregnant, I am not exaggerating. By the beginning of June I had gained close to 90 pounds and had another month to go.

Did I mention it was summer, and it was hot?

So, Ralph was busy working on Farm Bill stuff. Madison was busy getting into everything. And I was busy growing a baby.

Nap time was a must for both Madison and I. I looked forward to nap time like an ant looks for a picnic.

A few months before this we had moved Madison into a big girl bed, in preparation for the arrival of her sister. So, she was able to move around her room at will. Her room also held a changing table, where we changed her diaper. It also held all the stuff you need to take care of a babies needs in that area.

This particular day was a good day. Madison went down for her nap, and she slept. That meant I slept. We slept long and hard. It was wonderful.

After an hour or so, I was roused from my slumber by the sound of my oldest daughter playing in her room. Me being so large with child, decided to let her play. She was quiet, she was content. Really, what could go wrong?

Finally after 30 minutes of her quietly playing I decided that I should rouse myself and check on her. I quietly opened her door anticipating seeing her playing with her stuffed animals, or looking through a book.

That was NOT what I saw.

The jar of vaseline was not a small jar, of course. No, it was of the size that would make Sam Walton proud. It was huge, and now it was almost empty.

I quickly tried to decide what my game plan should be. The first thing I did was grab my camera. I knew that one day I would want documentation of the this, so I could laugh. At the moment it wasn't so chuckle inducing. 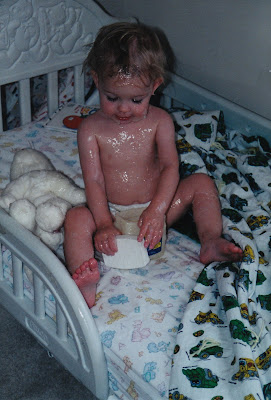 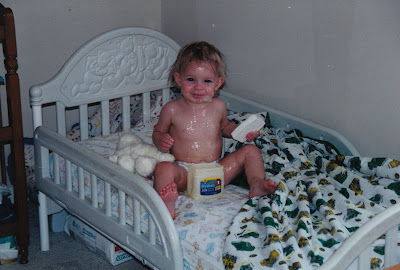 Then I quickly, well as quickly as I could, got her into the bath tub. I thought a thorough scrubbing and she would be good as new.

After the third time of shampooing her hair and seeing no chance of the vaseline coming out, I dialed Ralph's cell. He actually answered, to my surprise. My guess is he thought I was going into labor.

I started telling him what had happened and the fact that the vaseline was not coming out, and she was greasy all over. I will admit, I was almost in tears.

And do you know what my dear, loving husband did?

Clearly he had not heard me, so I continue explaining my messy situation. Asking him to offer any solutions.

His response - use Ajax.

Ralph finished up his meeting, and came home to assist his very large, pregnant wife. The only thing was as he walked in the door, I handed him his daughter and said, "She's yours. Whatever you got to do to get this mess off, do it." I walked out of the house, drove to McDonald's and ate supper, by myself. No vaseline or soap involved.

When I got home later that night, Madison was pretty much vaseline free. Except for her hair. It was stringy and greasy for weeks. Kind of like their hair after the mayo treatment.

And if you are curious as to how Ralph got the stuff off of her, well Dawn dish detergent is good for more than cutting grease from pots and pans.
Posted by Michelle Yoder at 2:46 PM