“It Happened in Italy” by Elizabeth Bettina 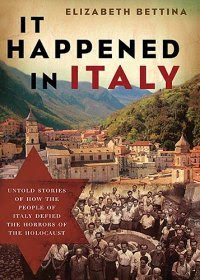 The premise of this book is the author’s discovery of how in the middle of what was the world’s worst atrocity committed against Jews, there was a place that offered hope. In the book Ms. Bettina discovers that the town of Campagna, Italy had an interment camp that held Jews, but this camp was much different than those in Germany. The Jewish people were allowed to live.
This book very much intrigued me when I read the back cover. I had not heard much about World War II until I got into college and took a class about what happened to the Jewish people. I was shocked. So, when I read that this book was about people who had survived the war, because of the kindness of those in small towns in Italy, I wanted to read more. Unfortunately this book left me wanting more. I was disappointed that there was not more detail of the stories of the survivors. It was more about the author’s discovery of the survivor’s stories and the adventure of connecting the survivors back to Italy. The writing was a little disjointed and hard to follow.
This is such an important story to share. That even in bad times, there were good people.
Posted by Michelle Yoder at 8:14 PM