Ok, this summer I have decided to be intentional on what we do as a family. I got the idea of a themed Family Night from another blog that I read. So Tuesday night was our first one. Let me just say - it was good intentions!
I became ill part way through the day. Ralph had a rough day at work. Then it was cloudy and we could not do part of what I had planned. Success - probably not. Fun - I think so. So the theme this night was Starry Night. The girls did their own version of Van Goh's Starry Night. We cut stars out and hung them over the table. All the food was star shaped - star shaped sandwiches, star shaped jello, cucumbers and carrots in a star shape. And blue gatorade to match the sky. We had planned on taking Madison's telescope out and look at the stars, but it was too cloudy. We also let the girls use tin foil to dress up in astronaut suits.
So, all in all good night. 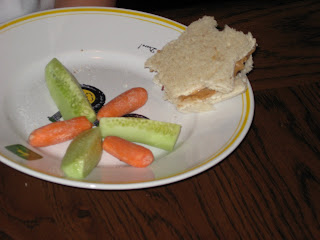 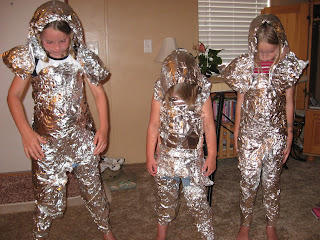 Girls dressed up in their suits 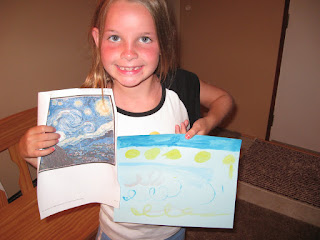 Madison and her painting (on the right) 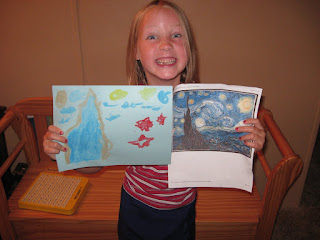 Laney and her painting (on the left) 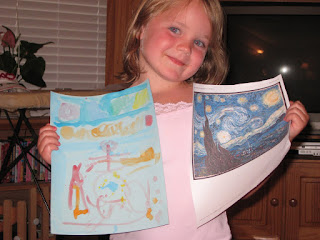 Morgan and her painting (on the left) 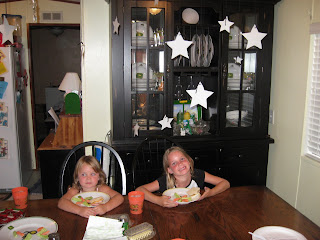 Stars over the table
Posted by Michelle Yoder at 6:31 PM

Great idea! I must say I LOVE the tinfoil outfits!! :-)

Oh..... I was not expecting the photos! Absolutely hilarious and such a great idea. I shared with the ladies in my office and they loved that idea! Haha.... Looks like fun!

You are such a good mom!! I'm so impressed!